Gahhh this is my life with anxiety.

I'm tired of it. I usually manage well, but it turns out a lot of stress can still send me spiraling. I'm so glad I'm in my forties, not my teens or twenties. I have better coping strategies now.

I notice my feelings. I don't judge them. I sit with them. I get what information I can from them.

And I keep going.

It makes sense I feel this way. But even if it didn't make sense, my feelings would still be valid.

Learning this new job continues to kick my butt. I got some feedback today that was delivered constructively but was still hard to hear. My car has been in the shop for weeks. I like my rental car and so far the process is going smoothly. So there's lots to be thankful for, but it's still a pain. Something to keep track of, something to pay for, and something to plan around. It takes up head space. Not to mention I'm moving. I'm sitting around boxes. My boyfriend and I will be physically moving all of them soon, along with the furniture. But first, we decided to repaint the kitchen before moving in, which has turned into repainting the living room as well. There's a lot of good, but it's a bit overwhelming. Plus, my sewing machine and all of my fabric are packed away.

I am out of balance.

But that's how it goes sometimes.

In my experience, life doesn't happen for years and years. Then life happens all at once.

From Creating to Building

After my second and final attempt at IVF did not result in pregnancy, I sat in my recliner with my dog at my feet and felt the most empty and lost I had ever felt in my life. Now what?? What am I going to do with the rest of my life when I don't even want to be alive?

I thought of my dad. How present he was to give me a happy childhood. How hard he worked to afford after school activities and college for me. How loving he was to raise me with his value system and a sense of fun.

I am not a religious person, but I definitely believe in something bigger than me. So I gave all of my sadness and all of my emptiness and all of my questions over to my faith. I couldn't problem solve anymore. I was completely spent.

I gave myself a week to sit in despondency. I mean, I'd already been lost for years...
What was one more week?

After a week, I decided to move.

I knew I could no longer sit around my children's house waiting for life to happen to me. I was confused why I even bought a house in the suburbs in the first place. Except, deep down, I knew why. It was the perfect house for my children. The perfect floor plan. Plus, the house was equidistant between two recreational places I knew we'd be going to a lot, at least until my children could express their own interests and then we would go explore whatever they wanted.

But now... The house, the location... None of it was necessary.
None of it fit the life I was going to have.

I decided which state to move to. I discovered a new profession. I applied to go back to school. I knew it was going to take a long time to create a whole new life for myself. For 35 years I had planned on having children. I had saved everything from my teaching days so I could homeschool. I owned at least 1,000 kids books (and even that is a low estimate!). It was going to take a whole freaking lot to completely change directions.

A little over three years into the future, I had moved to another state, was finishing up school, and was getting divorced. Oh. Only two of those three things were planned.

Still, I knew it would take more time to actually build a life for myself...

Now it has been three more years since that point. I've moved a couple more times and had several different jobs. It's been hard and exhausting but like I always say: What was the alternative? Stay stuck where I was? I felt like I'd already wasted enough of my life...

As of this past week I feel like I am finally moving from creating a life I want to live to building a life I want to live. As of now, I live where I want to be, I have a job I like, a boyfriend I love, and a hobby that makes me happy. Most importantly, I have the best relationship with myself that I've ever had. I accept the annoying things that I do and I'm proud of who I am, what I've worked through, and what I've learned. And I'm amazed at the life I am building.

I joined a quilt guild last week! I'm much younger than the average age of the members in the guild, but I don't care. I'm going to make new friendships with these women. I will learn about their lives, including their children and grandchildren, and we will talk a whole, whole lot about quilting!! I am so excited.

I also joined my profession's state organization and I'm in the process of starting a new regional district with a woman that I haven't even met yet. I am so enthusiastic about this.

My co-workers at my new job are nice and someone is planning a family-friendly social event (meaning, bring your kids, spouse, partner, etc.) for an upcoming Saturday. My co-workers are friendly people and it will be nice to get together outside of work in the outdoors for a picnic. (My co-workers are also vaccinated which is immensely relieving.) I am looking forward to it.

I did it! I created a life I want to live. I decided on WHO and HOW and WHERE I want to be and I did it. Now I don't have to create it anymore. Now I get to just build on it. And I love it.

I love my life.

And I thank my children every day. I had picked out a boy's name and girl's name and so I thank them both out loud quite often. We don't get to be together on Earth in this lifetime, but I feel our love and their guidance as they bring me closer to myself, to others, and to my true purpose for being here: to be of service to my community. 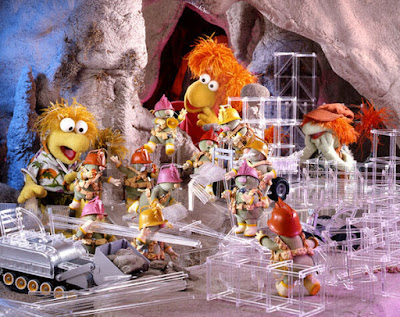 (My favorite tv show as a kid was Fraggle Rock and writing about building my new life reminded me of the Doozers, the characters that were always building. Plus, Fraggle Rock had one of the best theme songs ever.)

Relatable Words from Others

Hearing other people's stories is a privilege. Being there for people when they are at their most vulnerable is a big responsibility. I would have never considered a new career, much less one in healthcare (I *hate* anything medical and I'm the most anxious patient ever), if it weren't for my experiences with infertility.

I still don't like it when things don't go according to plan. I definitely don't like waiting. I don't like injections, blood draws, or ultrasounds. I'm sure I never will. But I can handle it. All of it. And I remember all of it too. Because of this, when I work with people I try to really see each person, empathize with their feelings, and validate their experience.

Every day at work I experience so many different feelings and situations.

Today I heard an elderly person say, "I'm trying to live, but it seems like I can't live or die." It reminded me of when I felt like that, in between living and being dead. This person has different circumstances from me, but these awful feelings transcend many different scenarios. I felt like I could relate. There was nothing I could say, but I could listen.

Also today, I heard another elderly person say, "Yeah, I never married. I never met the right man. Didn't have children either. I just did whatever I wanted. Like I do now. It's great!" And just like that, on the complete other end of the spectrum of my infertility-related feelings, I could relate to this sentiment too. It felt great.

I don't have children and I do whatever I want. Of course, I have to live within the parameters of real life and my budget and everything. But not raising children is the reason why I changed careers, why I moved out of state, why I got divorced, and why I live where I live now.

I'm doing what I want. I'm living my life, not anyone else's.

Is sleep a privilege? I've been requiring and, fortunately, getting a lot of sleep lately. But I don't mention it in casual conversation at work. I feel like I have sleep privilege. I hear my co-workers talk about not sleeping through the night with a baby or getting up with a sick kid. I know they're tired. I mean, dang, *I* am tired and I am getting a full night's sleep every night.

I made a comment about taking a nap once and my Department Lead asked me to think of her when I took my naps. I smiled and replied, "Sure, I'll think of you when I nap and you can think of me when you get little kid snuggles and together we'll have it all" and somehow it wasn't awkward or rude sounding or over sharing or anything that left me with a weird feeling later. It was just the two of us talking and the conversation just flowed and we both laughed and I doubt she's thought about it since.

So that's what's been going on with me.

Sleep. Work. Learning this new job that's kicking my butt and brain. It's a great opportunity because I was hired to cover two different departments, but I'm learning both systems as things come up. It's a not-linear way of learning (aka real life) and it's hard.

I went from hibernating all winter to being vaccinated, working, and interacting with (masked!) people. It's a lot of physical, social, and cognitive demands. It's a lot to adjust to.

I'm appreciating it! I'm just tired. And I'm thankful for my restorative sleep.