Did you know Norm on Cheers is infertile?

(Er, was infertile? I'm not sure what verb tense to use with a tv show character...)

I'm currently rewatching the entire show, beginning with the first episode, and, WHAT DID HE JUST SAY, there it is in the middle of season one.

Coach asked Norm why he and Vera didn't ever have any kids. Norm said, "I can't." And then in typical Norm fashion he made a joke out of it by saying, "I look at Vera. I just can't." But I know the kind of humor that can underscore infertility. And I was elated to learn that infertility was mentioned back in 1983 on one of my favorite tv shows.

It got me thinking...
What other cultural references are there to infertility in tv shows, books, movies, etc.?

The first reference I learned about was The Flintstones. Barney and Betty Rubble were unable to conceive children which led to the adoption of their son, Bamm-Bamm.

The next reference I learned about was Dr. Suess. He and his first wife were unable to have children and so they invented a daughter named Chrysanthemum Pearl, about whom they made up wild stories. (Have fun going down an internet rabbit hole with that one!)

What about you? Where have you heard infertility referenced in pop culture? I'd love to expand my knowledge on this topic. 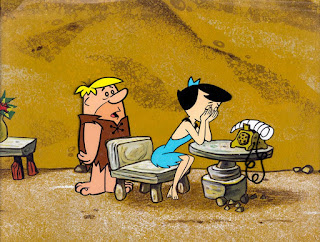 Posted by Infertile Phoenix at 4:56 PM