To restate the obvious, I planned on having children. It was something I wanted and something I looked forward to. It was my lifelong dream. And then it didn't happen. But it wasn't like not getting a puppy or a promotion. It wasn't even like not making the Olympics after a lifetime of training. It was much more primal and devastating than that.

I understandably fell into a deep depression during my unsuccessful pursuit of motherhood. It came to a point where I knew I could not keep going on unless something changed. But what and how and with what energy, care, and cognitive capacity, I didn't know.

I made an entirely different plan for my life. It involved selling my house, moving, and going back to school to change careers. The mere thought of doing all that overwhelmed and exhausted me so I didn't think about it. I decided to take one step at a time and see what happened.

And then I learned that my new plan sucked. Again, I was at a loss. So I started this blog.

That was three years ago. Since then I've moved to another state, graduated, and gotten divorced. Only two of those three things were planned.

After everything I've been through, you'd think I'd be done with making plans. But I'm not. I still make plans. I just don't expect them to work out how I plan. Not anymore. But I also can't just sit by and let life happen to me. So I make plans, do what I can, and see what happens.

It's time again for me to make new plans. It feels like I am where I am supposed to be right now but not forever. I'm not sure yet what's next and that's fine too. It took a while and it took a lot, but I finally created a life I want to live. Now I want to keep making it better and better...


In the meantime, I'll be quilting. 💚 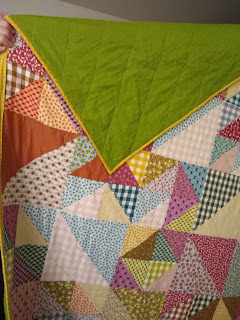 (Pictured: My 1st Quilt)
Posted by Infertile Phoenix at 9:16 PM