When LIFE is Funny

Here is a silly little story.

My boyfriend and I were playing the board game LIFE the other day. I hadn't played it in decades. Do you know this game? I thought it was really fun when I was kid. Now it's not as fascinating lol. Basically, you spin a wheel and move around the board collecting your salary, paying your taxes, and running into both rewards and accidents that either give you money or require you to pay. Like I said, I found it more interesting when I was a kid. Now it's just too much like, well, life. Ha! 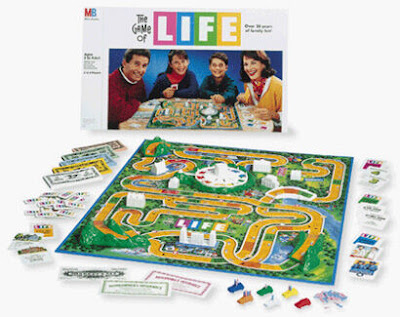 Everyone in the game must have a job for their salary and every player must get married.

Not every player will have kids. That depends on whether or not you land on a space that says you have a son, daughter, or twins. If you do land on one of those spaces, every opponent must pay you a $1,000 (double that if it's twins). It's like a required baby gift or a mandatory baby shower attendance. Or, maybe it is simulating paying taxes for public education (something I'll never complain about in real life, I want my community educated).

My boyfriend landed on three of those spaces and had a son, a daughter, and then twins.

I did not land on any of those spaces. Even when playing a board game I don't have kids.

The funny part to me? I won! At the end of the game, he had all those kids and no money and I had no kids and all the money. Hahahaha.

Now if only that were true in real life!! Where's all my money, Universe?? 😂😂

Posted by Infertile Phoenix at 11:04 AM

Email ThisBlogThis!Share to TwitterShare to FacebookShare to Pinterest
Labels: Living My Life, Progress in Recovery